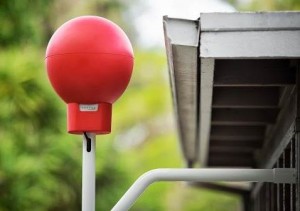 Google’s ambitious Project Loon, by which broadband could be delivered to remote areas by means of balloon-mounted transceivers, is entering a testing phase — and the company is getting volunteers from California’s Central Valley to try it out.

The project’s Google+ page posted an invitation to people in Central California who were willing to have antennas installed at their homes. The Loon balloons will fly overhead and exchange Internet traffic with these antennas, providing some real-world data on how the system would work and potential problems.

Enough people apparently signed up, because the short survey required to submit a household for consideration has been taken down. The form now only consists of a note that the company has “received enough responses” for the time being, but would post on Google+ again if more are volunteers needed.

It’s not the first time the balloons have taken flight. Last October, residents of Kentucky witnessed a mysterious object floating over the region, and pronounced it a UFO — little did they know, it was an early test of the balloons Google would use to fly its Internet-beaming apparatus over areas with little or no connectivity.

More information about Project Loon can be found at its Web page.