iPhone hoax: No, you can’t recharge it in the microwave, LAPD warns 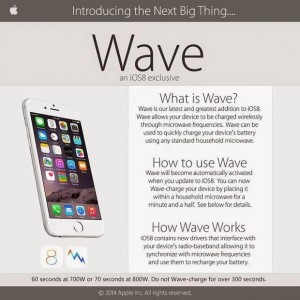 No, the latest iPhone software does not allow for the device to be quickly charged by heating it up in the microwave, despite some convincing, but very fake online ads..

Microwaving the phone will not only ruin the device, it could cause a fire or explosion, authorities said.

But a hoax floating around the Internet seemed so legitimate to some that even police are spreading the warning, as noted by the Los Angeles Police Department communications unit on Twitter.

“This #Wave capability is a #hoax. Don’t be fooled into microwaving your #iPhone6. #Apple #Smartphone,” the LAPD communications unit tweeted.

In a photoshopped ad that looks authentic, the hoax claims that the most recent software, iOS8, has a feature called “Wave,” which allows for the quick charging.

The directions, which again, are a hoax, call for the phone to be “charged” for 60 seconds at 700W or 70 seconds at 800W. The fake ad even goes on to say the charging time should not exceed 300 seconds.

“No metal object should ever be placed in the microwave,” Humphrey said. “Even a little tin foil can cause a fire, so that much metal from a phone could lead to some manner of explosion.”

The Fire Department routinely gets calls about microwave fires, Humphrey said. But so far, none have involved an iPhone.